Opening: "High above there is the Moon, cold and quiet, no air, no life, but glowing in the sky."

"Large in trim size as well as topic, this stirring account retraces Apollo 11's historic mission in brief but precise detail, and also brilliantly captures the mighty scope and drama of the achievement. Rendered in delicate lines and subtly modulated watercolors, the eye-filling illustrations allow viewers to follow the three astronauts as they lumber aboard their spacecraft for the blastoff and ensuing weeklong journey ("…there's no fresh air outside the window;/after a week this small home will not smell so good./This is not why anyone/wants to be an astronaut"). They split up so that two can make their famous sortie, and then reunite for the return to "the good and lonely Earth,/glowing in the sky." Floca enhances his brief, poetic main text with an opening spread that illustrates each component of Apollo 11, and a lucid closing summary of the entire Apollo program that, among other enlightening facts, includes a comment from Neil Armstrong about what he said versus what he meant to say when he stepped onto the lunar surface."

Why I Love This Book:
After reading the Caldecott winning Locomotive, I had to get some of Floca's other books. Moonshot is enthralling. Floca combines lyrical storytelling with gorgeous illustrations. This book has a wide audience, appealing to those with an interest in space, astronomy, and U.S. history, but most importantly, to those who are not yet interested in those topics. I challenge you not be drawn in by this book.

Field Trip: If you are local and looking for exhibits of spacecraft, the Smithsonian's Udvar-Hazy Center, near Dulles International Airport, houses many models, prototypes, and gear, including the Space Shuttle Discovery.

Virtual Field Trip to the Moon 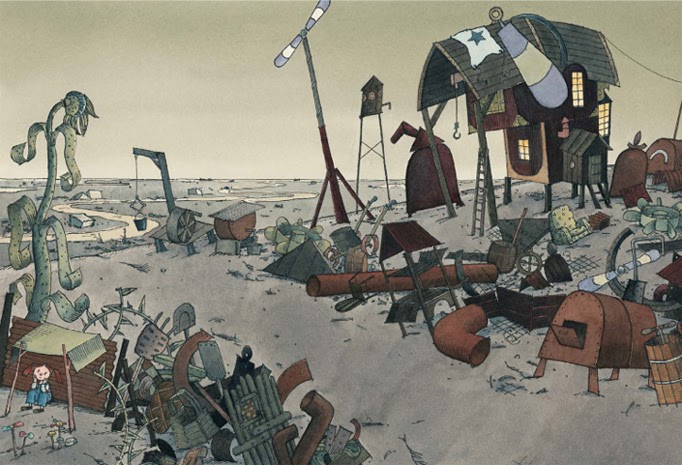 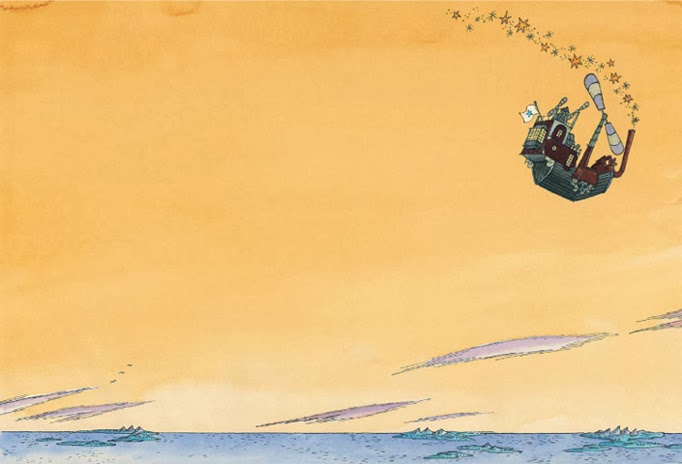 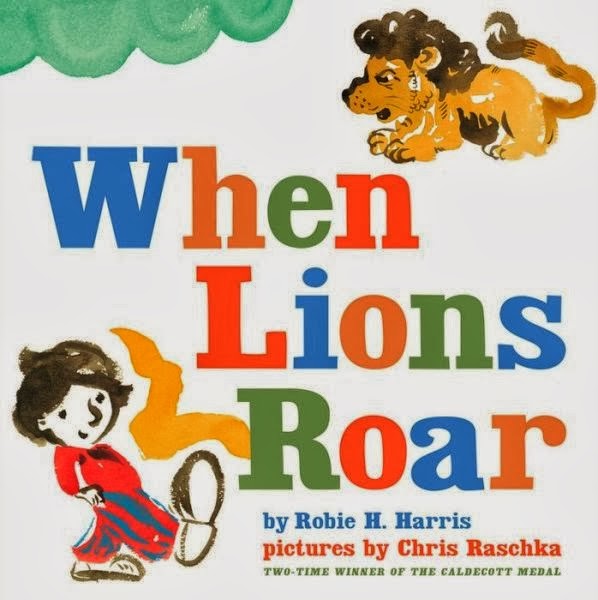 
Synopsis: (from School Library Journal)
Loud, unexpected and upsetting noises can send a child into a tailspin. Shrill sirens, earsplitting animal sounds at the zoo, a rumbling thunderstorm, and angry parents are a few of the sounds that distress this small boy as he goes through his day. When he's fearful, he takes control of his emotions, turns off “the scary,” and creates a haven for himself. He simply sits down, shuts his eyes, gathers his courage, and confronts his fear: “‘Go away,' I say. ‘Scary! Go away.'”  Brightly colored, deceptively simple crayon and watercolor illustrations in red, orange, green, blue, and brown showcase the character and the main noisemakers on a crisp white background. Use this title along with Florence Parry Heide's Some Things Are Scary (Candlewick, 2000) to discuss fear and methods to challenge it. Scary happens, you deal with it, and then you move on: a good lesson.–Maryann H. Owen, Children's Literature Specialist, Mt. Pleasant, WI

Why I Love This Book:
Simple text, colorful and emotive illustrations, and a straightforward approach to handling fear make this a winner.

PPBF: A Sweet Smell of Roses 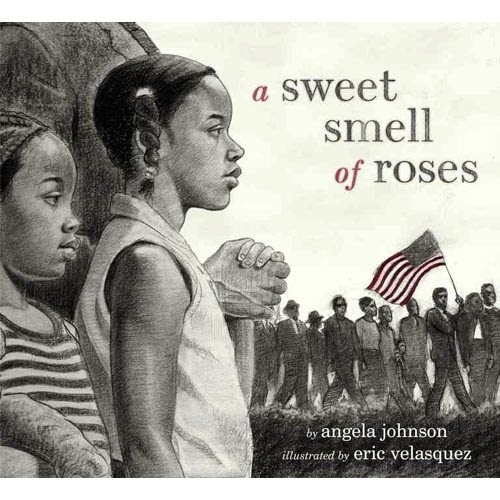 
Opening: "After a night of soft rain there is a sweet smell of roses as my sister, Minnie, and I slip past Mama's door and out of the house down Charlotte Street."


K-Gr. 2. History and politics get personal for young readers in this dramatic, large-size picture book about an African American child and her younger sister who steal out of the house to join the Civil Rights marchers and listen to Dr. King speak. The child's clear, first-person narrative draws on the language of the struggle ("we look farther down the road"), and Velasquez' realistic charcoal pictures, in black and white with an occasional touch of red, evoke the news footage of the time. The protestors confront the glowering police, and there are children among the racists who yell, "You are not right. Equality can't be yours." But this book is not only about segregation; it's also about the crowds of people "walking our way toward freedom," the thrilling portrait of Dr. King, and the two brave kids who cross the line. Hazel Rochman

Why I Love This Book:
While African-American History is American History, setting aside the month of February to honor African-American leaders, writers, scientists, etc. is an important way to highlight achievements that have traditionally been marginalized. A Sweet Smell of Roses reaches into that space where young children are learning about the history of our country's inequality for the first time. It places them into the shoes of children who feel hope and pride and a powerful sense of positive change coming from the peaceful protests of the Civil Rights Movement. Children of all races and backgrounds need books like this to empower them and remind them of the important role they have to play. As Angela Johnson says in her Author's Note, this book is "a tribute to the … brave boys and girls who - like their adult counterparts - could not resist the scent of freedom carried aloft by the winds of change."

Resources:
The 50th Anniversary of the March on Washington was in 2013. Here is a list of resources, including a Civil Rights Interactive Timeline

Nonfiction book (2012 - for middle and high school students) that delves into the role of young people in the Civil Rights Movement - We've Got a Job: The 1963 Birmingham Children's March