Opening: "Here is a road made for crossing the country, a new road of rails made for people to ride."

Here are the locomotives, the iron horses, the great machines, pulling their trains behind them.

Here are the crews that make them run, and here is how they do it.

And here is a family, heading West, hoping to start a new life.

It is the summer of 1869, and trains, crews, and family are traveling together, riding America's first transcontinental railroad, still new, just built.

In these pages, dense with the details of their trip, are the sounds, speed, and strength of the locomotives; the work that keeps them moving; the thrill of travel from plains to mountinas to oceans.

Come hear the hiss of the steam, feel the heat of the engine, watch the landscape race by. Come ride the rails, come cross the young country! ALL ABOARD!

Why I Love This Book:
This is a history lesson, disguised as a story, rich with pour-over illustrations that stop the show. Not to mention that it just won the Caldecott Medal! The text is lyrical and describes all the details of a transcontinental train ride: the exciting, the dangerous, and the hygienic. Who knew it was "rude to use the toilet when the train is sitting at the station."? Check out this gem which will appeal to young and mature train enthusiasts, history buffs, art lovers, and coffee table book collectors.

Are you familiar with the versatile Linda Sue Park? She has written novels for young readers, as well as picture books which range in scope from folktales and Korean traditions, to rhythmic rhyming stories and poetry, to unique concept books that appeal to preschoolers and keep the adult reader interested. She is most well known for A Single Shard which won the Newbery Medal in 2002. Check out her website for a catalog of her books, some fun, and a fabulous "writing" tab with tips for wanna-be writers, like me. :)

Here is a taste: 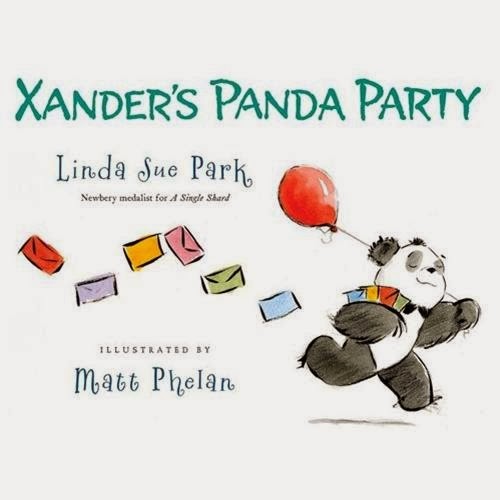 Xander the Panda wants a party. Alas, he is the only panda at the zoo. What is he to do? He has to change his "point of view." The themes of friendship, inclusion, and fun make this a favorite to read again and again. And the ending of this story is just perfect! Watch the book trailer here. 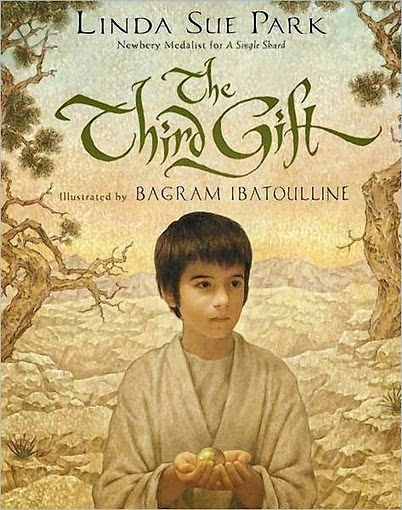 Opening: "My father collects tears." A beautiful and unexpected Christmas story, poetically describing the traditional collection of myrrh. I especially like the author's explanatory note at the end which gives the story its historical context.

A sijo is a traditional form of Korean poetry, similar to the Japanese haiku. They are short, usually about daily life, and have a humorous twist ending. This book would be a nice complement to a poetry unit. 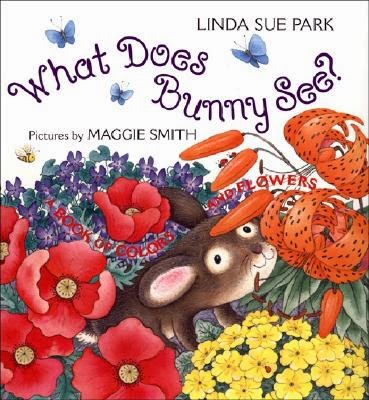 What Does Bunny See?: A Book of Colors
illustrated by Maggie Smith
2005

Flower colors jump out at Bunny as she hops around the cottage garden. Each page's bouncy rhyme leaves the color word for the next page, encouraging preschoolers to interact with the text and finish the rhyme. 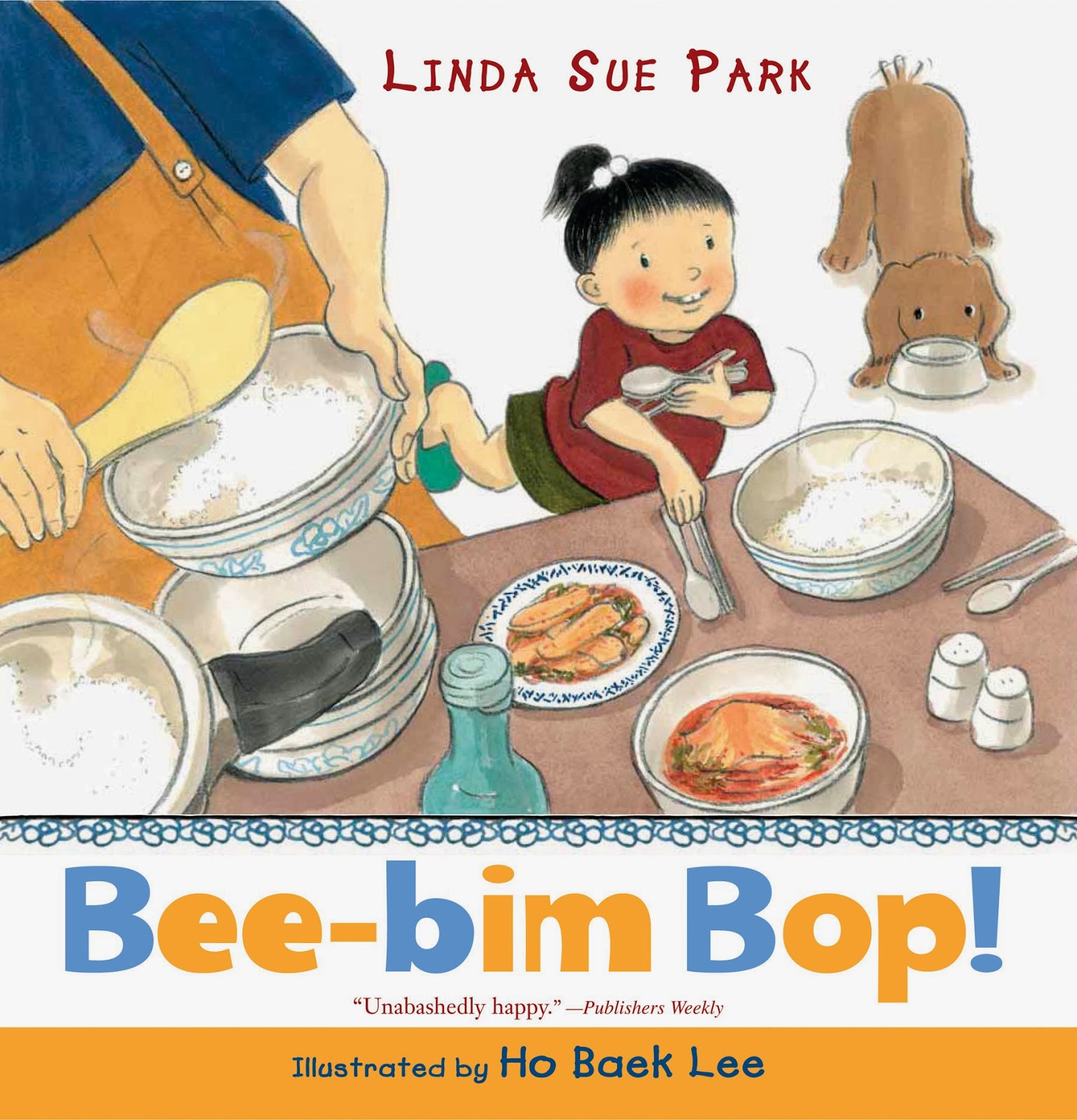 Readers are introduced to a traditional Korean food in this upbeat rhyming book, narrated by a young girl who is "Hungry hungry hungry for some BEE-BIM BOP!" 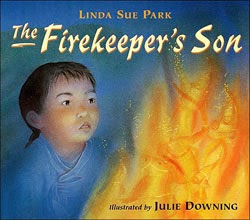 This work of historical fiction, set in Korea in the early 1800s, depicts a bonfire signal system that was used to report peace and danger from the provinces to the king's palace. "When the king saw the fire on the last mountain, he knew that all was well in the land." In this tale, Sang-hee, the Firekeeper's son, must take over his father's duties one night. He has a choice: light the fire to declare the day's peace or say that he spilled the coals accidentally. "Sang-hee wished he could see soldiers. Just once." Which will he choose?

Posted by Laura Renauld at 12:57 PM No comments:

PPBF: The Day Leo Said I HATE YOU! 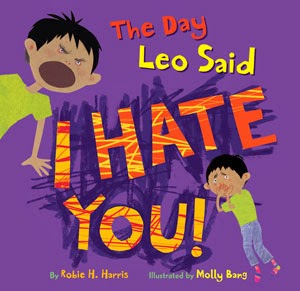 No More NO!
I Hate NO!
I HATE YOU!
Uh-oh… those three words just popped out - before Leo could stop them!

What's Mommy going to do now? Has Leo said words he shouldn't have said? How can those words make someone else feel? Will Mommy still love him?

In a warm and reassuring manner, Robie H. Harris and Molly Bang portray what happens when a little  boy feels SO frustrated and SO mad at a parent who has said NO all day long. Together, Harris and Bang delicately navigate not only the momentary angry feelings and outbursts of young children, but also the most profound bonds between a parent and a child.

Why I Love This Book:
I'm a big fan of Molly Bang's work, so when I saw her name on the cover, I had to check out this book.  I wasn't disappointed. Reminiscent of her book When Sophie Gets Angry - Really, Really Angry…, she employs bold color contrasts, masterfully incorporating the text into the illustrations, highlighting "NO". This book hits the mark, showing the frustration of both the mother and child. And the visual impact of the ultimate explosion, "I HATE YOU!", is the perfect pairing for those harsh words. The ending of this book is lovely, flowing from the reassurance of unconditional love to silly sharing and smiles.

Online resource for anger management: "Get Your ANGRIES Out!"

PPBF: The Old Woman & the Wave


Opening: "Once upon a time there was an old woman who lived under a wave."

The wave loves the old woman. That is why it waits on dry land, curled over her house, bent low to hear her every word. Most of these are grumpy, though, for the old woman has lived her whole life beneath the wave and therefore can see nothing good in it. Her roof is stuck like a pincushion with umbrellas, which she hopes will stem the drippings and droppings from above. But no. She and the wave go on with their lives until a wanderer appears and sees not the bother in the wondrous wave, but the possibilities. And then the old woman can see them, too, and together with her old dog Bones she flows away toward the blue and distant mountains, surging and plunging, swirling and climbing in a washtub boat she's had handy just in case the wave ever fell. It had fallen years ago: in love. The words and spectacular collage paintings make something majestic out of newfound vision -- an original way for sharing with young dreamers.

Why I Love This Book:
This book has an unusual and compelling premise. The opening leads to so many questions: How does the wave stay over the house? Why doesn't the woman move if it annoys her? Why does the wave put up with the woman's bluster? Reminiscent of Shel Silverstein's The Giving Tree, the wave loves the old woman. Will the old women ever come to see the wave as more than a nuisance? This whimsical tale is made complete by clever collage illustrations.

Article about strategies for children dealing with change