Potty training held some anxiety for me as a mom.  When to start?  Will he go willingly?  Will we be spending the whole day in the bathroom?  For how many days?  What will my toddler be doing during all this time?  I admit, I put off potty training until I was ready.  My preschooler had been ready for a while.  On the other hand, waiting until he turned three made it fairly easy.  There was still the first day full of accidents where I felt like we would never get it right and we were on a newborn schedule (but for peeing, instead of eating), but after that, he got it.  Since I’ve been asked to share by some friends, here’s what we did:


For a couple of weeks before I planned to dive into serious potty training, we read the potty books listed in this post.  I had a special basket for them and I would use the opportunity to repeat to my son that he would be using the potty soon. 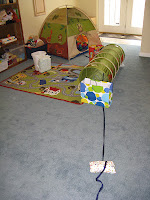 I introduced potty training with a treasure hunt.  My son followed a rope downstairs to a present of wrapped undies, through a tunnel to find juice and salty snacks, and into a tent which held a treat for successful pottying: M&Ms.  After that, he saw a wastebasket and a pile of his diapers.  We made a big deal of “throwing out” his diapers (which we saved for our next son) and putting on his first pair of underwear.  He’s been in underwear ever since, even at night.

I’d put the timer on for 30 minutes.  When it went off, he’d ring a special bell and I’d yell “It’s potty party time!” (I put a “party” sign on the bathroom door.)  We’d march in and he’d try to go, surprising me by knowing how to pee standing up (he must have learned that at preschool!).  We had a container for toys that was out of reach of his brother, but luckily, keeping my toddler entertained while big brother was in the bathroom was not as much of a challenge as I anticipated.  He wanted to be in the bathroom with us, practice pottying on the portable potty and listening to the stories while big brother waited and waited on the big toilet.  After a successful attempt, complete with flushing and hand washing, I doled out the M&Ms.  You know, I actually bought mini-M&Ms in a cute little tube and gave him 2 each time?  I think that amounted to ½ a regular M&M.  His little brother had to get one for practicing, of course.
As I mentioned earlier, there were quite a few accidents for one day, then he started going on command, and finally, he started telling us when he needed to go.  He was completely potty trained in 4 days, without any wet nights.  We made our special trip to Target to pick out underwear (Thomas, of course!) and we celebrated the end of potty party weekend with cupcakes.  (That was the treat finale.  No more M&Ms!)  We are so proud of our big boy!

JJJ This is a keeper; “I went potty!” 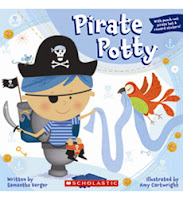 Pirate Potty (A: Samantha Berger; I: Amy Cartwright) – Of course, a book with accessories becomes immediately endearing, as did this book with its pop-out pirate hat.  Did you know that “Even pirates use the potty!”?  My son was especially taken with the pirate potty songs, which he would try to imitate at times: “Fi-fiddle-dee-dee, I’ve got to make pee-pee. “ Or, “Fi-fiddle-dee-doo, I’ve got to make poo-poo.”  And, yes, there is a girl version called Princess Potty. JJJ

Dinosaur vs. The Potty (A/I: Bob Shea) – Dinosaur is a stubborn toddler who insists he doesn’t need to go potty through a whole series of contests.  He always conquers his liquid-filled (!) fun: making lemonade, running through a sprinkler, drinking three juice boxes at lunch… until finally his victory dance turns into a potty dance.  Who will win?  Dinosaur or the Potty?  A lively, roaring good time (although I’m not sure a toddler will quite follow the connection between the contests and having to use the bathroom…). J 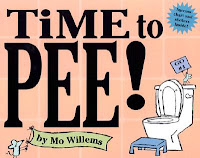 Time to Pee! (A/I: Mo Willems) – MoWillems, of Sesame Street and Knuffle Bunny fame, has created a team of mouse cheerleaders to prompt and encourage toilet use.  One of the best parts is that the book includes a success chart and stickers.  Overall, I found the text a bit disjointed since nearly every word gets its own “text box” in the form of a flag, balloon, parachute, etc., which a mouse is maneuvering.  The pictures are fun to look at, but the message can get lost.  I appreciate the line near the end, “Everything will still be right where it was.”  Most books don’t treat this anxiety, but my son needed to be reassured that his toys would be waiting for him.  (And not played with by his younger brother.) JJ 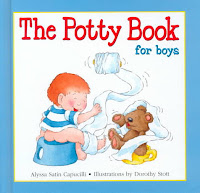 The Potty Book for Boys (A: Alyssa Satin Capucilli; I: Dorothy Stott) – As you would expect, there is a “girl” version of this book.  This book was especially effective because the boy’s name and favorite color were the same as my son’s, so he felt like he was the boy in the book.  “Bye-bye, pee!  Bye-bye, poop!” is a line he exclaims when flushing the toilet and we even followed the book’s ideas of calling Grandma to share the news and making a special shopping trip for big boy underwear. JJJ 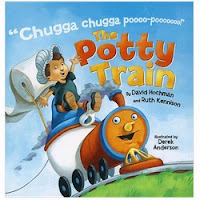 The Potty Train (A: David Hochman and Ruth Kennison; I: Derek Anderson) – Trains in any form are a big hit in our house, so it is no surprise that this book was requested again and again.  I think it’s a bit vague as far as potty procedures go, but the theme and illustrations are highly engaging.  Another favorite potty line: “Chugga chugga poooo-pooooooo!” JJJ 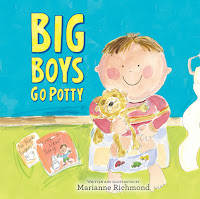 Big Boys Go Potty (A/I: Marianne Richmond) – I like the way this book starts out describing all the things big boys can do before going into the potty procedure section of the story.  I think this is what drew my son in, too, but it was not his favorite.  Big Girls Go Potty is also available. JJ 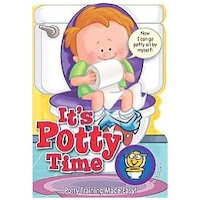 It’s Potty Time (for boys; In the “Time to” series) (Edited by Chris Sharp and Gary Currant) – This is a pretty basic “how-to” potty book.  What distinguishes it?  A push button that makes a flushing sound.  That clinched it for us! JJJ 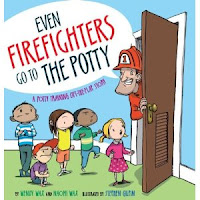 Even Firefighters Go To The Potty: A Potty Training Lift-The-Flap Story (A: Wendy Wax and Naomi Wax; I: Stephen Gilpin) – This might be the overall favorite. This is NOT a potty procedure book, but instead, highlights important community roles, such as firefighter, doctor, police officer, and lets you “open the door” to find them on the potty!  This is funny, of course, but it is also a subtle (or not-so-subtle!) lesson that all people, even role models, have to go to the bathroom.  This was the only book I found that showed an occasional urinal, which was incredibly helpful, since I had never been able to show one to my son in person. JJJ
Posted by Laura Renauld at 1:28 PM