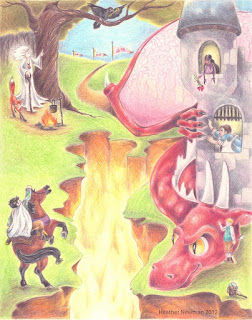 Contest Rules:
The contest will be for a children's story of 250 words or less based on the picture above and in which somebody somewhere in your story says, in dialogue, "Did/do you see that?" (you may substitute any of the other senses - "Did/do you hear/feel/taste/smell that?") and somebody somewhere in your story says, "Goodbye!" (you are allowed to substitute "Farewell!", "Au revoir!", "Sayonara!", "Ciao!", or "So long!")

UNDERCOVER IN FAIRYLAND
Smarmy, knighted spy for Medieval Intelligence: 6thCourt, has been Drag’s loyal groom for two years.  While weary of the constant scale scrubbing, his mission to keep Drag away from the castle has been successful…until now.  Now, thinks Smarmy, MI6 will never promote me unless I rescue Princess Alia!
Chaos erupts around the castle as the news of Drag’s conquest spreads throughout Fairyland. Heroes and Villains come out of the woodwork to be part of the story. Not only do I have to battle Drag and save the Princess, Smarmy calculates, but I also have to deal with an overly eager Prince bent on rescuing a Damsel-in-Distress, a Sorceress who looks ready to cast a spell on anything that moves, and a girl who is about to throw flowers at the scene as if she is watching a staged play.
Thinking fast, Smarmy shouts: “Did you see that?” as he flings his scrub brush across the fiery ravine.  All the characters turn to look.  Smarmy quickly pours his bucket of suds over Drag’s head. Howling, Drag claws at his eyes, buying Smarmy enough time to race to the first tower room. With a hearty “Ciao!”, he calls his trusty blackbird, who flies from his perch with the key.  “Princess,” Smarmy bows, as the rotund and not-quite-beautiful Alia, disguised as a handmaid, sashays out of the room.
“It’s about time,” Princess Alia sniffs. “The Prince had his eye on the wrong girl!” (240)
Posted by Laura Renauld at 12:23 PM