If you come to my house, you will probably get roped into playing The Three Little Pigs. My 4-year-old will dictate who will be the wolf and who will be the pigs. Or from a different version, who will be the rigs and the big, bad wrecking ball. Or even the aliens and the big, bad robot (read on!). My boys love the repetitive lines that involve huffing and puffing and chinny-chin-chins. There is something about the themes of good vs. evil and outsmarting the villain that captures the imagination.

If you read the original tale, though, only the smartest (brick house) pig survives the wolf's attacks and outsmarts him a number of times before the wolf comes down the chimney and the pig boils him and eats him for supper. Needless to say, most of the retellings I've come across go the route of the first and second pig running to the next sibling for help and the wolf getting away with only a scalding at the end. I prefer this change myself, and it seems that taking the harshness out of the story has opened the door for some fabulous fractured fairy tales. Enjoy! 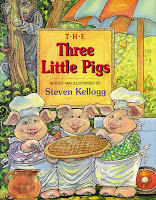 The Three Little Pigs by Steven Kellogg - In this silly and delightful rendition, the pigs are waffle entrepreneurs who are frightened when the wolf, Tempesto, turns their quiet world upside-down. Sporting a shirt that says, "Say YES to THUGS", the wolf, as expected, has a bad temper and a big appetite. And he hates waffles. Luckily the pigs' mama, Serafina Sow, receives the airmailed request for help (Don't skip the title page or you will miss this part!) and arrives just in the nick of time.

The Three Little Tamales by Eric A. Kimmel; Illustrated by Valeria Docampo - Three tamales run away from the little restaurant where they are left by the window to cool. They don't want to be eaten! One makes a home of sagebrush, one of cornstalks, and one inside a cactus. When Señor Lobo, the Big Bad Wolf, comes along, the tamales have to think fast. I really enjoy the rhyming dialogue between Señor Lobo and the tamales in this book. Punctuated with Spanish words, this charming Southwestern version of The Three Little Pigs has a glossary at the beginning. And for those familiar with Kimmel's The Runaway Tortilla, this is an almost sequel. 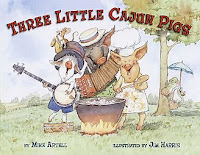 Three Little Cajun Pigs by Mike Artell; Illustrated by Jim Harris - Here is a fabulous Cajun retelling, written in rhyme and dialect, which transports any read-aloud to a Louisiana bayou.  Check out the opening couplet: "In south Loo-siana, where gators grow big,/ Live t'ree Cajun pigs and an ol' mama pig." And there is a helpful glossary at the beginning for pronunciation and definitions of the French that is included in the story. Also check out Petite Rouge, by the same team, which is a Cajun retelling of Little Red Riding Hood. 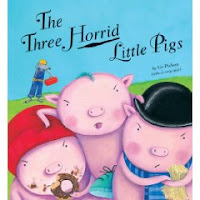 The Three Horrid Little Pigs by Liz Pichon - So why did the first two pigs build their houses of straw and twigs? Because they are lazy, of course! Hysterical illustrations couple with this topsy-turvy retelling that let the reader see the characters in a new light. The wolf is just a builder who wants to help! But what will he do when the three pigs want to steal his house? "...he got out a great big pot of boiling..." Read the story to find out! 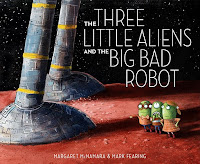 The Three Little Aliens and the Big Bad Robot by Margaret McNamara; Illustrated by Mark Fearing - This version is certainly unique and even a bit educational. The reader gets a lesson on the solar system as three aliens seek the right place to build a home. (Earth is not considered because it is too crowded.) With updated repetitive phrases to reflect aliens, robots, and space rovers, this story successfully moves the original tale to a place where no pig has gone before. My boys especially liked the robot voice, which they use in their play often.
Posted by Laura Renauld at 3:30 AM