There are not many books that can claim the themes of sports, music, history, cultural traditions, and racial prejudice. Illustrator E. B. Lewis' watercolors capture them all in two picture books where baseballs and violins break down barriers of race, creed, and family expectations. 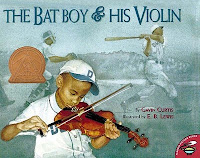 The Bat Boy & His Violin by Gavin Curtis - It is 1948 and Papa manages a team in the Negro National League. Much to Papa's dismay, Reginald would rather play the violin than play baseball. When Papa makes Reginald bat boy of the Dukes, he hopes that his son will come to love the game. After some near disasters with the bats, Reginald picks up his violin. The music is like a salve to the discouraged players and soon, they are scoring runs. It turns out that music and baseball can mix and relationships between fathers and sons can heal. 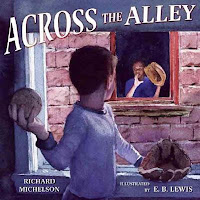 Across the Alley by Richard Michelson - Opening: "Every night, after Grandpa turns out the light, I count to twenty before I tiptoe out of bed and tug open my shade. Across the alley, I know Willie's doing the same. During the day we don't play together, but at night, when nobody's watching, Willie and I are best friends." Willie's daddy played in the Negro Leagues and he wants his son to follow in his footsteps. Abe's grandpa is teaching him how to play the violin so Abe can follow in his footsteps. Only the boys seem to be more interested in swapping hobbies. At night, between their windows, the boys play catch and pass the violin. What will happen if Grandpa finds out?
Posted by Laura Renauld at 11:04 AM