I have two boys, ages four and three. And the interest in sports has begun. My older son, in particular, loves to practice batting, kicking, throwing, and dribbling. While he's definitely more interested in playing at sports than reading about them, I keep my eye out for books that might pique his interest. I've recently come across some basketball-themed books that are imaginative and inspirational. Check them out of your library! 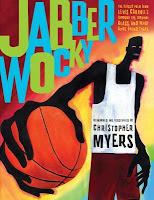 Jabberwocky: The classic poem from Lewis Carroll's Through the Looking-Glass, and What Alice Found There (Reimagined and illustrated by Christopher Myers) - When the nonsense poem "Jabberwocky" was first published in Through the Looking-Glass, and What Alice Found There in 1872, an epic was born. Despite the imagined language, there is no doubt as to the poem's story arc: a dark and dangerous creature has to be dealt with by the narrator's son. However, imagination holds the power to interpret and Christopher Myers rendering of this poem as a one-on-one basketball game is phenomenal.  And don't skip the Author's Note at the end, which adds weight and plausibility to Myers version. A true gem.

H.O.R.S.E.: A Game of Basketball and Imagination (By Christopher Myers) - Do you remember a time when you and a friend kept trying to one-up each other? In a good-natured game of H.O.R.S.E., imagination runs wild as two friends talk more than play as they describe the amazing shots they are going to make. Lace your shoes up tight. This one's a blast! 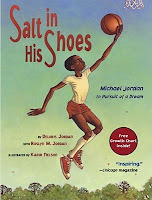 Salt in His Shoes: Michael Jordan in Pursuit of a Dream (Written by Deloris Jordan with Roslyn M. Jordan; Illustrated by Kadir Nelson) - In this tender and inspirational book about her son Michael's dream to play basketball, Deloris Jordan recalls a time when Michael just wanted to grow taller. "We'll put salt in your shoes and say a prayer every night. Before you know it, you'll be taller!" Kadir Nelson's illustrations of a young boy pursuing a dream are vibrant and engaging. And knowing the ultimate outcome of Michael Jordan's pursuit makes this story that much more satisfying. Also check out Deloris Jordan's Dream Big: Michael Jordan and the Pursuit of Olympic Gold.
Posted by Laura Renauld at 11:43 AM