My younger son is currently fascinated by the moon.  He looks for it in every book we read, he notices it in the still-light sky of evening.  He loves moon songs and even space-related songs, such as Rocketship Run (Laurie Berkner).  Another favorite of her songs is Moon, Moon, Moon (of course!).

The moon is everywhere in children's literature.  Perhaps it is because it is associated with goodnight books and lullabies.  Perhaps it is the obvious visual in the evening sky that spurs curiosity.  Whatever the reason, the moon is very present in the lives of our children and in the literature we share with them.

Below are some moon books that my son chooses over and over, some that I love and used to teach with, and some that we have recently discovered.  I'll note which is which :) 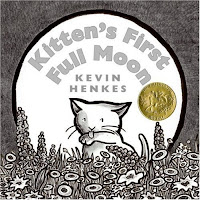 Kitten's First Full Moon by Kevin Henkes - When Kitten mistakes the moon for a little bowl of milk, she is in for many surprises as she tries again and again to reach it. This book has grown on me over the course of many lap-reads with my boys. I love the repetition of "Still, there was the little bowl of milk, just waiting" after each of Kitten's efforts to reach the moon. Kevin Henkes won a Caldecott Medal for his charcoal illustrations that show Kitten's tenacious spirit. 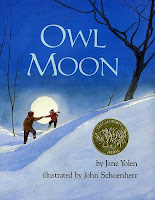 Owl Moon by Jane Yolen; illustrated by John Schoenherr - This beautiful book, full of silence, frigid air, and the hopeful lure of nature is the perfect foil to the heat-soaked cacophony of a summer day at the pool.  I love this book for it's precision of language, lyrically laid out to the soft rhythms of footsteps in the snow.  This story is as much about a child's special relationship with a parent as it is about finding an owl late one winter night.  This one was a classroom staple. 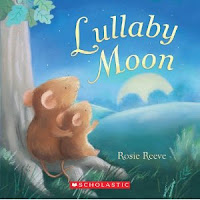 Lullaby Moon by Rosie Reeve - This sweet rhyme offers a quiet ending to the day for a mouse and his mom.  Fireflies and the moon light their way home, they share their adventures over warm milk, snuggle in a chair for a story, and then little mouse gets tucked into bed.  "So whisper good night to the lullaby moon."  Another favorite of my son. 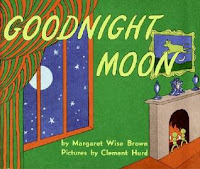 Goodnight Moon by Margaret Wise Brown; illustrated by Clement Hurd - This classic rhyming story of a quiet bedtime routine is a favorite of my boys.  My youngest loves pointing out the moon in every picture and is starting to name all the other objects as well.  The format of the book that puts the day to bed is very comforting and symbolic for my children.  It just makes it easier to say goodnight. 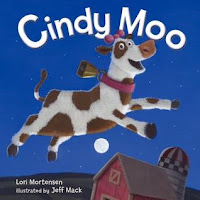 Cindy Moo by Lori Mortensen; illustrated by Jeff Mack - This hysterical book was new find for us at the library.  It begins with the familiar nursery rhyme "Hey Diddle, Diddle", which my youngest always asks to hear "aden".  And then it catapults the reader into a story of debate and glorious tries as the Diddle Farm cows wonder if jumping over the moon is really possible.  Do they succeed?  You need to read to find out :)