Fairy Tales and Nursery Rhymes are part of our literary conscious, which makes them ripe for allusions and altering. I've always been fascinated by retellings of traditional stories. I love a story told from a different character's point-of-view or with a twist in the plot. It's no wonder that I love the musicals Wicked and Into the Woods.

Take a look at how cleverly the authors and illustrators of these picture books combine a variety of classic tales, or more importantly, story expectations, to create something completely unique. These stories are heavily dependent on the reader's knowledge of our collective folklore. They are mash-ups. 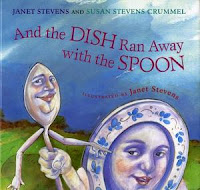 And the DISH Ran Away with the SPOON (Written by Janet Stevens and Susan Stevens Crummel; Illustrated by Janet Stevens) - What if the DISH and the SPOON ran away at the end of their rhyme and didn't come back? Full of puns and wit, this clever story involves a FORK in the road and his map, which the CAT, DOG, and COW use to search for their friends among various nursery rhymes and fairy tales. 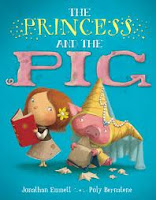 The Princess and the Pig (Written by Jonathan Emmett; Illustrated by Poly Bernatene) - In a story of mistaken identities and poor judgement, a baby princess and a piglet swap places with hilarious consequences. All of which are explained away with the repeated phrase, "It's the sort of thing that happens all the time in books," using classic fairy tales, such as Sleeping Beauty and The Frog Prince. 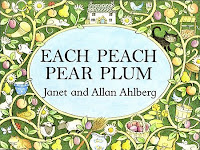 Each Peach Pear Plum (Janet and Allan Ahlberg) - From Tom Thumb to Cinderella to the Three Bears, Each Peach Pear Plum is a rollicking I-Spy adventure that leads from one classic character to another until they are all united by a sweet treat. This is a recurring favorite at my house. My 2 and 3 year old both love pouring over the details on every page and naming all the characters at the end. 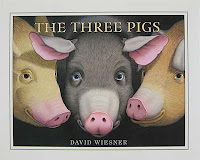 The Three Pigs (David Wiesner) - While this book starts with a typical telling of The Three Little Pigs, everything begins to go awry when the wolf blows the first pig right out of the story. Wiesner's imaginative illustrations lead the pigs (and the reader) on an adventure beyond their story and into some other stories. But when they want to go home, how will they scare away the wolf for good? Read this story to find out! 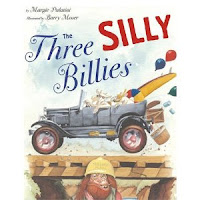 The Three Silly Billies (Written byMargie Palatini; Illustrated by Barry Moser) - What happens when the bridge the three billy goats need to cross is guarded by a troll who demands a toll? Find out in this very silly story full of puns and fairy tale characters, including the Three Bears, Red Riding Hood, and Jack (and the Giant). Bonus: There is a math lesson here. Add up the coins as the characters join the "pool" and see if you can get to a dollar.