My boys are fascinated with Goldilocks. As you know from my recent posts, we've been reading a lot of fractured fairy tales lately and I don't see that ebbing anytime soon. But, for some reason, Goldilocks has captured their imaginations more than the rest. What is so alluring about Goldilocks? Is it because she's a naughty, rule-breaker? Is it that this story has bears instead of a wolf? Perhaps it is because the bears don't seem as menacing as the wolf (Three Little Pigs, Little Red Riding Hood) or the troll (Three Billy Goats Gruff).

I have to admit, the original Goldilocks is not my favorite. I don't particularly like the way she gets off scot-free. That is why my favorite version of Goldilocks is the 2009 retelling by Ruth Sanderson. 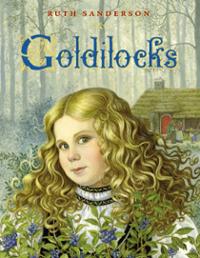 It is true to the original tale, but, in my opinion, it has a more satisfying ending. Goldilocks has to make amends for her actions and there is even a blueberry muffin recipe to extend the story to your kitchen.

Of course, there are many variations on Goldilocks. So many, in fact, that this is post 1 of 2! Here are some that have quickly become "read again" favorites. 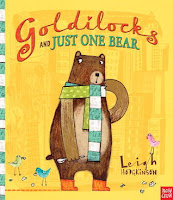 Goldilocks and Just One Bear (Leigh Hodgkinson) - How's this for an opening? "Once upon a time, there was this bear. One minute, he was strolling in the woods, all happy-go-lucky.... The next minute, he didn't have a crumb-of-a-clue where he was. He was one COMPLETELY lost bear." Written in a casual verbal style, a bear finds himself lost in a city (look for various fairy tale nods within the illustrations). This funny version of Goldilocks is full of misunderstood silliness and a unique twist that ties it back to the original story. 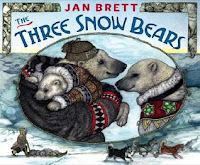 The Three Snow Bears (Jan Brett) - Jan Brett's unique illustrations wordlessly tell the snow bears' story alongside Aloo-ki's, an Inuit Goldilocks. Aloo-ki loses her dogsled and ventures inside the bears' igloo. There she tries their breakfast, their boots, and their beds. Although Aloo-ki is startled by their return, their farewell is amicable. Visit Jan Brett's website for a rich educational resource. 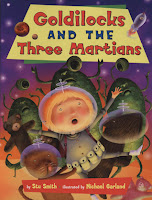 Goldilocks and the Three Martians (Stu Smith; Michael Garland) - In this rollicking rhyme, Goldilocks is determined to find a planet that is "just right." She circles the solar system, finding fault with all the planets until she comes to Mars. Only she is in for more than she bargained for! Will Earth be "just right" after all? 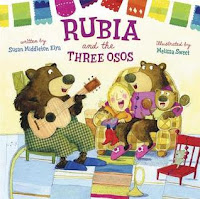 Rubia and the Three Osos (Susan Middleton Elya; Melissa Sweet) - Told in rhyming couplets, this clever version of Goldilocks is told in a combination of Spanish and English. The Spanish words are in bold, purple font and translation is helped by the context and illustrations. In true Goldilocks fashion, Rubia runs away when discovered by the bears. But then she does something a bit unexpected. She says, "Lo siento." A glossary of Spanish phrases is included at the end. 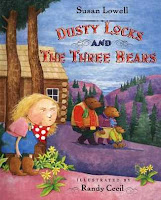 Dusty Locks and The Three Bears (Susan Lowell; Randy Cecil) - This is a Western Goldilocks, told with beans instead of porridge, and a dirty, ill-mannered little girl who ran away from home. Carefully chosen language highlights the Western theme and plenty of colorful similes and metaphors make this story come alive.
Posted by Laura Renauld at 4:00 AM