Back for more Three Little Pigs? There are so many fun variations to share. Enjoy this week's selections! 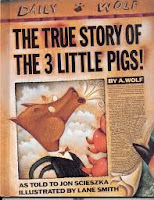 The True Story of the Three Little Pigs by Jon Scieszka; Illustrated by Lane Smith - Told in the first person by A. Wolf, this clever twist shows the Big Bad Wolf in a different light: "I don't know how this whole Big Bad Wolf thing got started, but it's all wrong." Do you need more to entice you? "The real story is about a sneeze and a cup of sugar." This is a classic (pub. 1989) and still one of my favorite variations on the theme of the Three Little Pigs. 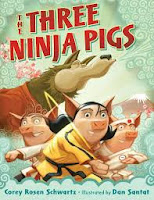 The Three Ninja Pigs by Corey Rosen Schwartz; Illustrated by Dan Santat - One of the most recent spins on this story (pub. 2012), The Three Ninja Pigs is the story of a bully and the three pigs who enroll in Ninja School to stop him. Written in a romping rhyme and paired with multi-framed spreads that look like stills from an Asian action movie, this unique retelling manages to defeat the wolf (as expected) while also emphasizing the character traits of perseverance and dedication. A winner! 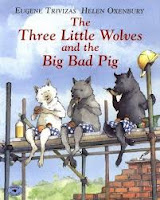 The Three Little Wolves and the Big Bad Pig by Eugene Trivizas; Illustrated by Helen Oxenbury - My boys were tickled by this title, as they immediately got the joke. While written in the same vein as The True Story of the Three Little Pigs, this follows the traditional storyline more closely, only to get progressively more and more ridiculous. The images of the wolves playing leisurely garden games is juxtaposed with the pig's destructive tools. This silly book has an equally silly ending. 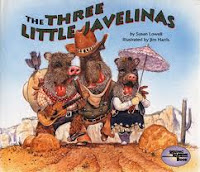 The Three Little Javelinas by Susan Lowell; Illustrated by Jim Harris - In a Southwestern twist, javelinas (cousins of pigs) build their houses of tumbleweeds, saguaro ribs, and adobe bricks. But what happens when Coyote decides to have pig for dinner? Learn about the source of Coyote, the trickster, in the author's note at the end.
Posted by Laura Renauld at 3:30 AM