When Spanish and English Join Together...

There has been a proliferation in recent years of books that use both English and Spanish text. What better way to give students whose first language is Spanish, or Spanish is spoken at home, access to reading and to story?

Ann Whitford Paul has a series of picture books in this vein. With a Southwestern vibe, four friends (Iguana, Conejo, Tortuga, and Culebra, i.e. Iguana, Rabbit, Turtle, and Snake) share many adventures. Paul has a way of crafting her stories so that the Spanish words are understandable to English speakers and vice versa. This technique could make for a stilted or explanatory story, but it does not. Spanish words are repeated in English by another character or the context gives a direct clue as to the word's meaning. There is also a glossary in each book, if you're stumped.

Ethan Long furnishes the illustrations, which offer colorful characters and exaggerated expressions. They also provide an excellent scaffold for deciphering the meaning of unknown Spanish/English words.

And another plus? Some of these are fractured fairy tales! Enjoy! 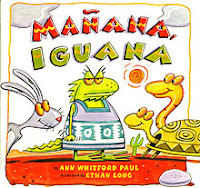 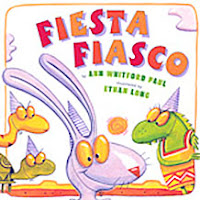 Fiesta Fiasco (2007) - The Bulletin of the Center for Children’s Books calls this “A creatively executed original trickster tale.” 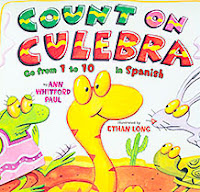 Count on Culebra: Go from 1 to 10 in Spanish (2008) - Culebra plays doctor and gets Iguana to forget her throbbing toe through counting. 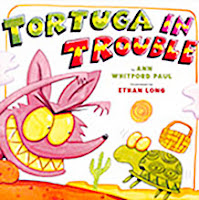 Tortuga in Trouble (2009) - A retelling of Little Red Riding Hood.