Ever since my family took a trip to Northern Ireland to visit friends in September, I've been enamored with Julia Donaldson's books.  Donaldson's writing career started out as singer/songwriter for children's television in Great Britain.  Her song, A Squash and a Squeeze, was made into a book in 1993, illustrated by Axel Scheffler, with whom she has collaborated on a number of books.

Best known here in the States is The Gruffalo, but many of her books are available through my local library.  Here is a smattering.  Enjoy! (Book listings include illustrator only, since this is an author study.  I've also included covers of the original book, before it was "translated" for a United States audience.  It is very interesting to note the differences.) 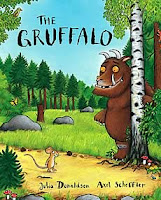 The Gruffalo (Illustrated by Axel Scheffler)

A mouse took a stroll through the deep dark wood.

A fox saw the mouse and the mouse looked good.
This book is a trickster tale at its best.  A cunning mouse creates a terrible monster, a gruffalo, to ward off predators.  The owl, snake, and fox are taken in.  But what happens when he stumbles upon an actual gruffalo???  And there is a sequel, titled The Gruffalo's Child.


"a modern classic" The Observer

One Mole Digging a Hole (Illustrated by Nick Sharratt)
Two snakes with garden rakes
Three bears picking pears .....
A basic concept book with a gardening angle, the unusual scenes play out in verse and illustration.  It had my boys giggling!
"There are jokes aplenty: foxes tidily filling boxes - with tomatoes, of all unlikely things - and crows with a hose helpfully watering the cabbages. Sharratt's uncluttered use of the page gives room for the build up of the numbers to have a clear visual effect." The Guardian 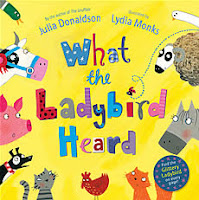 What the Ladybug Heard (Illustrated by Lydia Monks)

Once on a farm lived a ladybird
Who hardly ever spoke a word,
But the ladybird saw and the ladybird heard,
And here's what the animals said:

Two robbers intent on stealing the prize cow don't anticipate the power of the tiny ladybird to foil their plans! 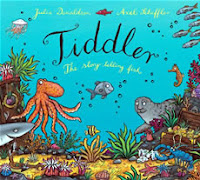 The Fish Who Cried Wolf (Illustrated by Axel Scheffler)

Once there was a fish and his name was Tiddler.
He wasn't much to look at, with his plain gray scales.
But Tiddler was a fish with a big imagination.
He blew small bubbles but he told tall tales.

Tiddler is always late for school and every excuse he makes is more outrageous than the last.  What will he do when he really gets caught in a fisherman's net? 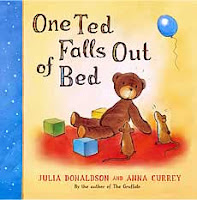 One Ted Falls Out of Bed (Illustrated by Anna Currey)

One ted
Falls out of bed.
He tugs and pulls the cover, BUT...
Two eyes are tight shut.

After Ted falls out of bed, he finds nighttime adventure with three mice.  This frolicking midnight romp counts up to ten, and then down again, until the story has come full circle and Ted is back in bed.

"Another little miracle from Julia Donaldson… it has the robust feel of a classic." The Bookseller 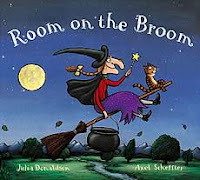 Room on the Broom (Illustrated by Axel Scheffler)

How the cat purred and how the witch grinned

As they sat on their broomstick and flew through the wind.

When a witch loses her hat, she rewards the dog who found it with a ride on her broom.  This scene repeats itself as other things blow off in the wind.  But what happens when a dragon appears that wants "witch and chips" with his tea?

"Julia Donaldson and Axel Scheffler have come up with another gem… we loved it." The Independent

Julia Donaldson has written many, many more picture books than I've highlighted here.  See what you can check out at your library!  To learn more about Julia Donaldson, her commission as the United Kingdom's Children's Laureate(term June 2011-June 2013), or to download a podcast of her talking about her books, go to her official website: http://www.juliadonaldson.co.uk/  Youtube also has videos of her singing, performing, and reading her stories.
Posted by Laura Renauld at 10:00 AM