Yes, today is Halloween.  I bet you thought that my boys chose to be a pirate and a dinosaur, based on the title of this post.  Nope!  They are going as trains.  Don't they look adorable? 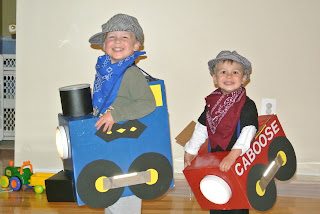 Pirates and dinosaurs are just some popular book themes that have been floating around the house lately, and believe it or not, there is actually a book that combines the two.  Just like my boys' favorite show, Dinosaur Train, the first book on my list is a brilliant combination of two things boys love: pirates and dinosaurs.  Note to my writerly self: just combine two popular topics, preferably unrelated, for story success!  So here it is: a random list of pirate and dinosaur books, starting with the one that brings the two together.  ROAR YO HO! 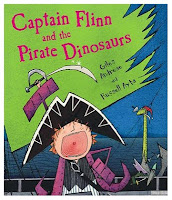 Captain Flinn and the Pirate Dinosaurs (Author: Giles Andreae; Illustrator: Russell Ayto) - Reminiscent of The Lion, The Witch, and the Wardrobe, Flinn finds himself in a closet, talking to a sobbing pirate captain about his lost ship, when the back of the closet falls away and a pirate ship is waiting.  Flinn is installed as captain (since the captain would rather cook) and the search for his missing ship begins.  Needless to say, when it is found, Flinn is astounded to find the crew are pirate dinosaurs!  With a T. Rex captain, of course.  Hilarious action sequences ensue and Captain Flinn is, of course, the hero.  If you like to read pirate stories, dinosaur books, or just like to daydream, this one's for you! 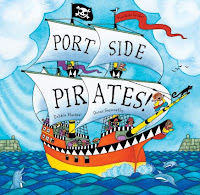 Portside Pirates! (Author: Debbie Harter; Illustrator: Oscar Seaworthy) - This is a much-loved favorite in my house, perhaps because the text is also a song.  (The book comes with a CD.)  And thanks to the illustrator's conception of a pirate ship manned by child pirates (even a baby pirate, with a bottle!), this book has unending appeal.  There is a terrific diagram at the end which labels all the parts of the ship.  My older son uses this "to count" since it is a numbered list.  My younger son likes to point to all the masts and the ship's cat.  Oh, and the cabin boy.  There are some other pirate facts included and the sheet music for the song. 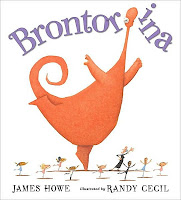 Brontorina (Author: James Howe; Illustrator: Randy Cecil) - Here's another book that juxtaposes two unrelated ideas: a dinosaur that dreams of being a ballerina.  Madame Lucille, the dance instructor, is unsure, but open-minded, and takes on this strange new pupil.  I enjoyed her character more than the rest.  Howe wrote her with passion for dance, a commanding presence, and a willingness to think outside the box.  Brontorina is a salve for all those dreams that got away (speaking as an adult reader of a picture book).  But they don't have to get away, do they?  The take-away?  Don't be afraid to dream big! 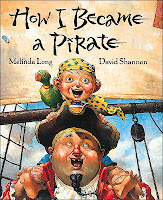 How I Became a Pirate (Author: Melinda Long; Illustrator: David Shannon) - (FROM http://www.melindalong.com/#!home/mainPage) "Pirates have green teeth—when they have any teeth at all. I know about pirates, because one day, when I was at the beach building a sand castle and minding my own business, a pirate ship sailed into view." So proclaims Jeremy Jacob, a boy who joins Captain Braid Beard and his crew in this witty look at the finer points of pirate life by the Caldecott Honor–winning illustrator David Shannon and the storyteller Melinda Long. Jeremy learns how to say “scurvy dog,” sing sea chanteys, and throw food . . . but he also learns that there are no books or good night kisses on board: “Pirates don’t tuck.” A swashbuckling adventure with fantastically silly, richly textured illustrations that suit the story to a T.

There is also a terrific Pirates Activity Book that complements this story, which teaches you how to make a pirate hat, eye patch, and talk like a pirate, among other things. 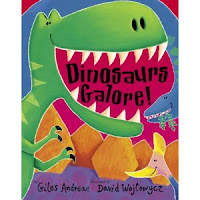 Dinosaurs Galore! (Author: Giles Andreae; Illustrator: David Wojtowycz) - Filled with quatrains describing a variety of dinosaurs from sun-up to sun-down, Andreae's text is both educational and entertaining.  My favorite?

Microraptor
I'm as little as a chicken,
but please don't be too hasty!
Although I may be chicken-sized,
I'm nowhere near as tasty!
Posted by Laura Renauld at 4:23 AM