I apologize for the two week hiatus.  We recently returned from a much needed reunion with far off friends.  We packed our suitcases and braced ourselves for international plane travel with our boys, ages two and three.  With little "confusion and delay", as Sir Topham Hatt would say, or as he is called in the U.K., the Fat Controller (a Thomas the Tank Engine reference, for those of you without preschoolers), we arrived in Belfast, Northern Ireland.  We spent a fantastic week in Co. Donegal, Ireland, and then back in the outskirts of Belfast.  Isn't this beautiful?

In a week or two, my post will be inspired by books that we read in the U.K. and Ireland.  Until then, enjoy these sassy stories!

As I mentioned, I have boys.  They like trucks, trains, boats, and, recently, dinosaurs.  While at the library, we happened upon Kate & Jim McMullan's book about a garbage truck: I Stink!  My kids thought it was funny, but, honestly, I thought the voice was a bit sassy.  As I've come to know the other books in this series, however, I am appreciating them a lot more.  The voices are hip, modern, current... making them fresh, fun, and accessible.  The characters have attitude and pluck. Definitely different than a lyrical or rhyming text.  These books are obviously well-researched and this husband and wife collaboration just works.  I love how the text is part of the illustration: fonts of various size and color add to each spread and give traction to the already unique voice.  Check out their website.  Below is the series in its entirety with professional reviews. 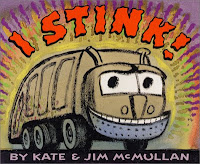 I Stink! (Harper Collins 2002)
"Most kids already love garbage trucks on general principle, and one assumes that can only go double for a sass-mouthed, animated dumper like this one, out on its early-morning rounds: "See those bags? I SMELL BREAKFAST! Crew? Get me to the curb! Lights? Blink! Brakes? Squeal! Tail gate? SAY AH!" The many opportunities for loud, large-type sound effects should make for spirited readings, and a recipe for "alphabet soup" lets young readers practice their letters, working through the ABCs from apple cores to zipped-up ziti with zucchini." - Paul Hughes, Amazon.com Review 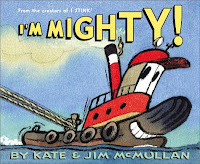 I'm Mighty! (Harper Collins 2003)
"...the tugboat that narrates this picture book tells his story with more than a splash of moxie... there's so much here to enjoy: the energetic writing, the boastful tug's bravado, and the well-conceived illustrations. Best of all, the big boats need help from the little boat instead of the other way around, making this an appealing nautical version of every preschooler's dream." - Carolyn Phelan, BOOKLIST 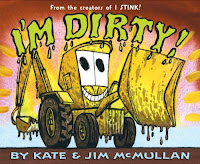 I'm Dirty! (Harper Collins 2006)
"Counting down from 10 to 1, the backhoe removes the alliterative trash: 4 cat-clawed couches, 3 scuffed-up signs, 2 tossed-out toilet seats, 1 wonky washing machine. Then, he pulls out a tree stump, takes a mud bath, and back-drags his bucket over the dirt. Throughout the story, the machine becomes progressively dirtier, with a repeating motif of mud. The text flies about the pages, changing size, shape, and orientation. With its saucy tone and dynamic color cartoon illustrations, this picture book exudes energy. – Suzanne Myers Harold, School Library Journal, Starred 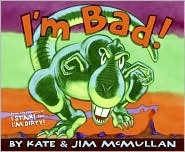 I'm Bad! (Harper Collins 2008)
"Like the bragging, swaggering vehicles in the authors’ previous titles, such as I Stink!, the tyrannosaurus narrator of this picture book is all boasts: “I’m REALLY bad. Scare-the-tails-off-all-the-other-dinosaurs BAD.”... the high-energy illustrations and macho narrator’s words create a rowdy, crowd-pleasing whole." - Gillian Engberg, BOOKLIST 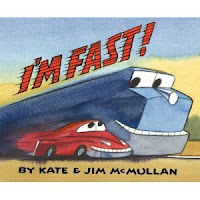 I'm Fast! (Harper Collins 2012)
"The train engine is the big talker in the McMullans' latest vehicles-with-attitude tale." - Christine Heppermann, HORNBOOK
Posted by Laura Renauld at 10:26 AM